The Town of Clayton honored P. Brooks Banta on his 60 years of public service. Mr. Banta served on Clayton Town Council from 1965 to 1979 and served as the Mayor from 1979 to 1979. In 1982 he served on the Dewey Beach Town Council and served two 5-year terms on the Smyrna School District Board of Education. In 1992 Mr. Banta was appointed to the Kent County Regional Planning Commission until 1996 when he was elected as commissioner to the Kent County Levy Court where he remained in office for 24 years, during the last 13 of those years he has served as President of the Levy Court. 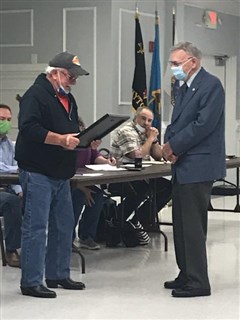