On August 12, 2019 at the Council Meeting, Vice Mayor Alex Dias and the Council honored former Mayor David Letterman for his many years of service to the Town of Clayton and the Council. Mayor Letterman was appointed to the Planning & Zoning Commission in 1995. He served on this committee until April 2010 when he was elected to Town Council. David Letterman was elected Mayor in May 2015 and served in that capacity until July 31, 2019. Mayor Letterman had to step down as he and his family are moving outside the Clayton corporate limits. Vice Mayor Dias announced during the meeting that the council seat vacancy will be filled at the September Council Meeting. 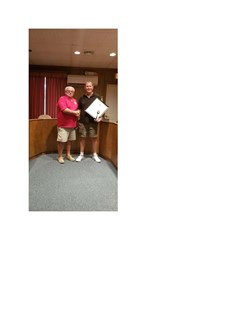